On the Nicoyan coast, ways of living and believing in Christ are so varied that there are more churches than schools, so The Voice of Guanacaste documented the groups that devote their time to studying Jesus’ work and worshipping in different ways.

Within a distance of about 30 kilometers (19 miles) from Buena Vista in Samara to Nosara, there are Catholics, Jehovah’s Witnesses and several denominations of Evangelicals, who base their beliefs on biblical foundations. Although the basis of all of them is Christ, their styles of worship, music, doctrines and rituals vary according to the belief.

The parish of Nosara serves 22 coastal communities, and even though Mass is offered every day, Sunday is the most important day of the week for them. The faithful who attend Mass dress up in their best clothes, Bible in hand.

On the other hand, the evangelical churches meet four times a week to worship Jesus and acknowledge their sins before God. These churches are located in the Hollywood neighborhood of the town of Nosara, in the center of Nosara, and in La Esperanza of Nosara, as well as in Barco Quebrado and in San Fernando in the district of Samara.

For their part, Jehovah’s Witnesses imitate the model of life established by Jesus Christ and are known for the daily preaching work that they perform from house to house, usually organized in pairs of two. The Kingdom Hall is located in the town of Esterones, Samara, and has 33 active members who meet twice a week in a small hall to praise Jehovah, the creator of the universe. They also give Bible discourses in which the whole audience participates. 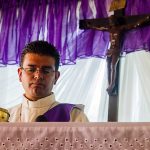 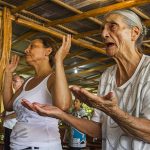 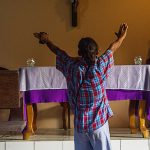 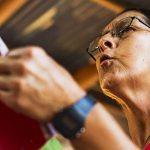 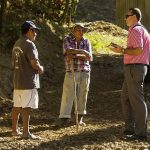 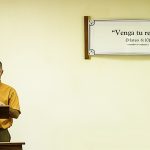 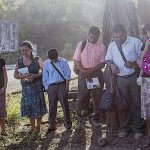 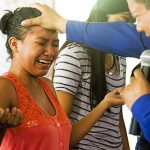 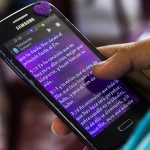 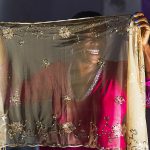 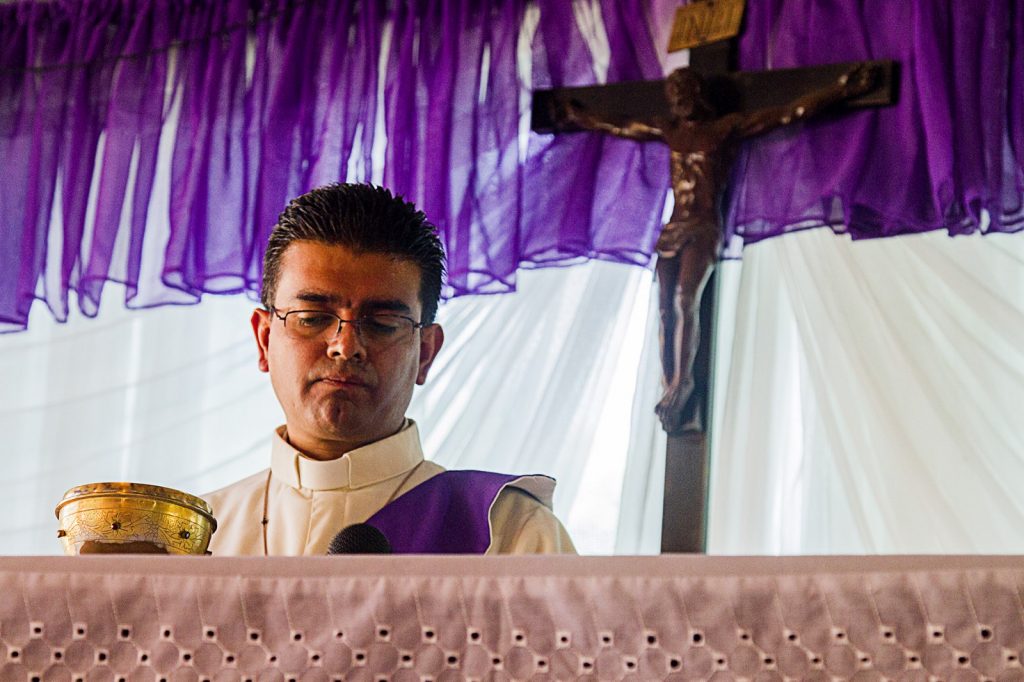 The Nosara Parish holds three Masses on Sundays at 10 a.m., 5 p.m. and 7 p.m. About 500 faithful attend Mass on this day. Deacon Dagoberto Campos Salas at the Nosara Church on Sunday, December 21, 2014. 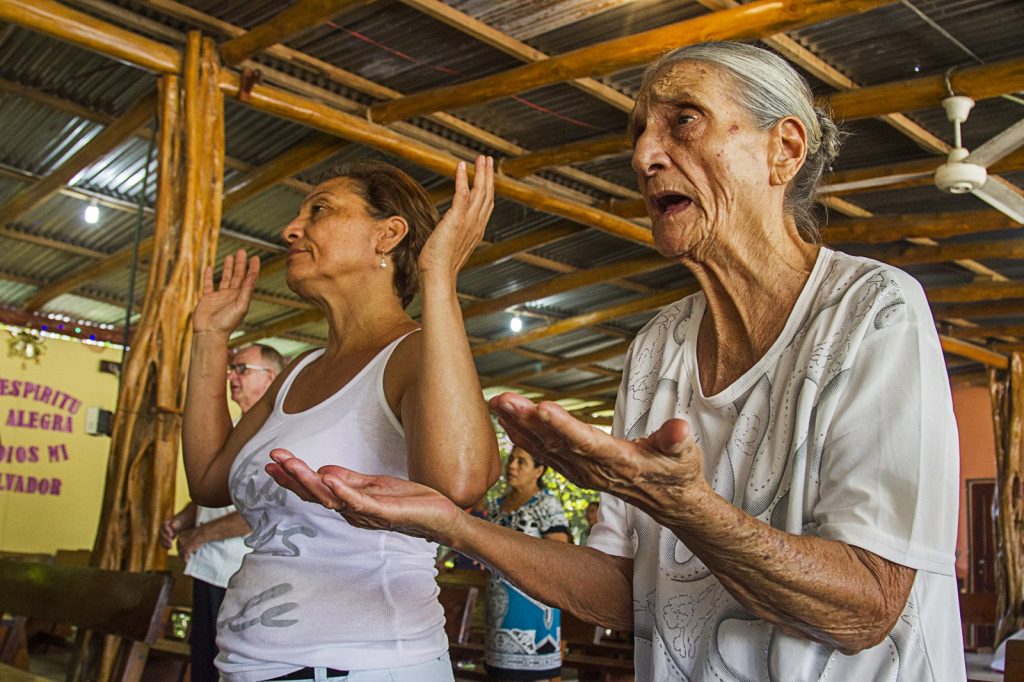 During Sunday morning Mass on December 21 in the Nosara Parish, two women say the prayer of the faithful for the needs of the community of believers. Mass in the Nosara Parish is held in a pavilion, the only structure that remained standing after the 2012 earthquake destroyed the church. 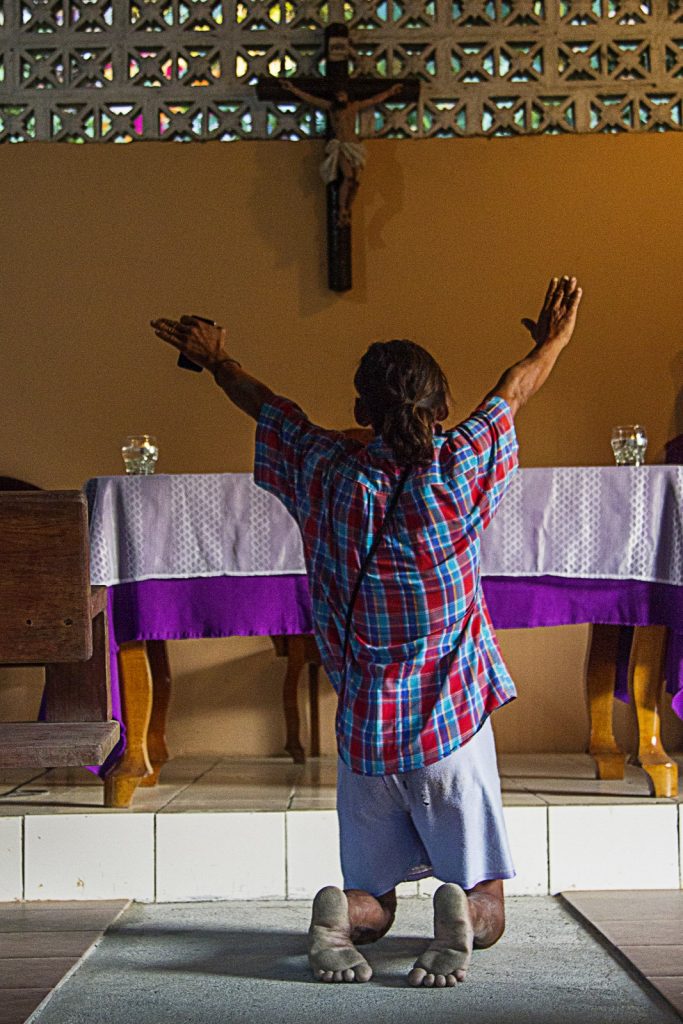 With open arms and phone in hand, a homeless person asks forgiveness, yelling in front of the altar before Mass at the Catholic Church of El Torito on Saturday, December 20, 2014. 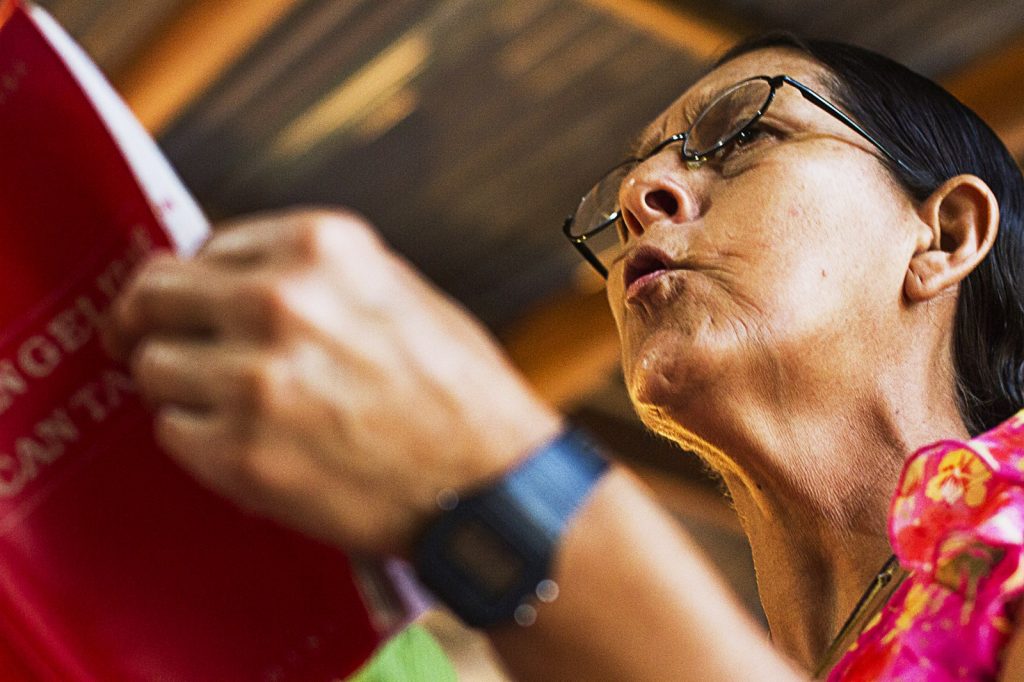 During the evening mass of the Catholic Church at El Torito, at dusk, a woman directs praise 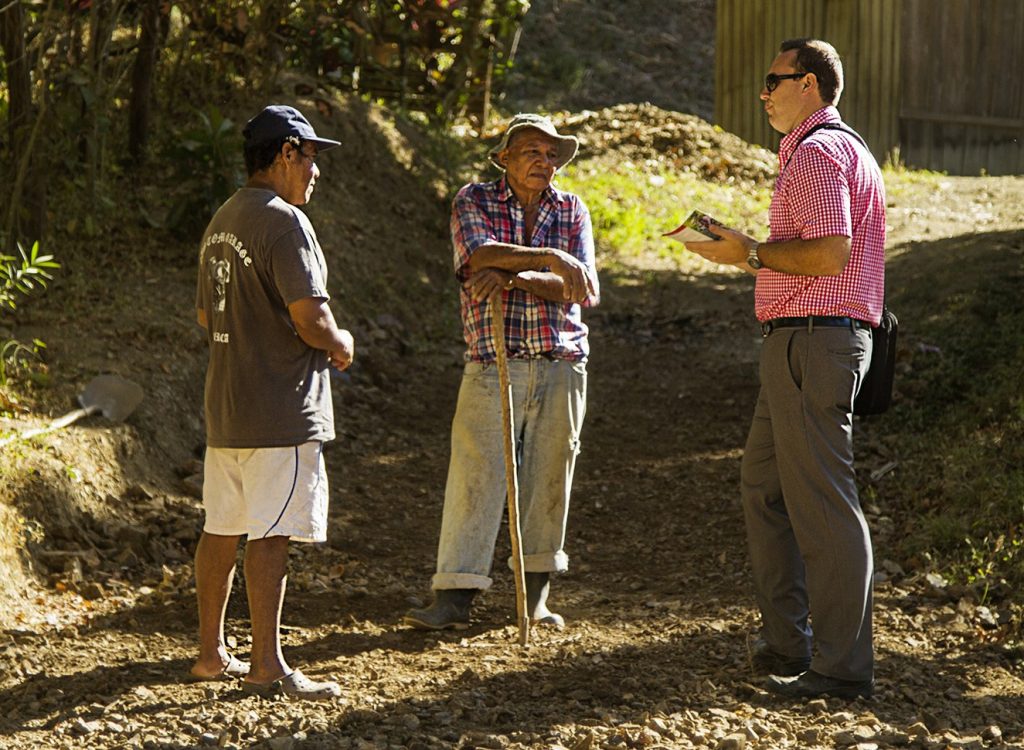 Residents of San Fernando pause from their work to receive a scriptural message from Christopher Cook, one of the elders of the Buena Vista congregation of Jehovah’s Witnesses, on Saturday, December 27. 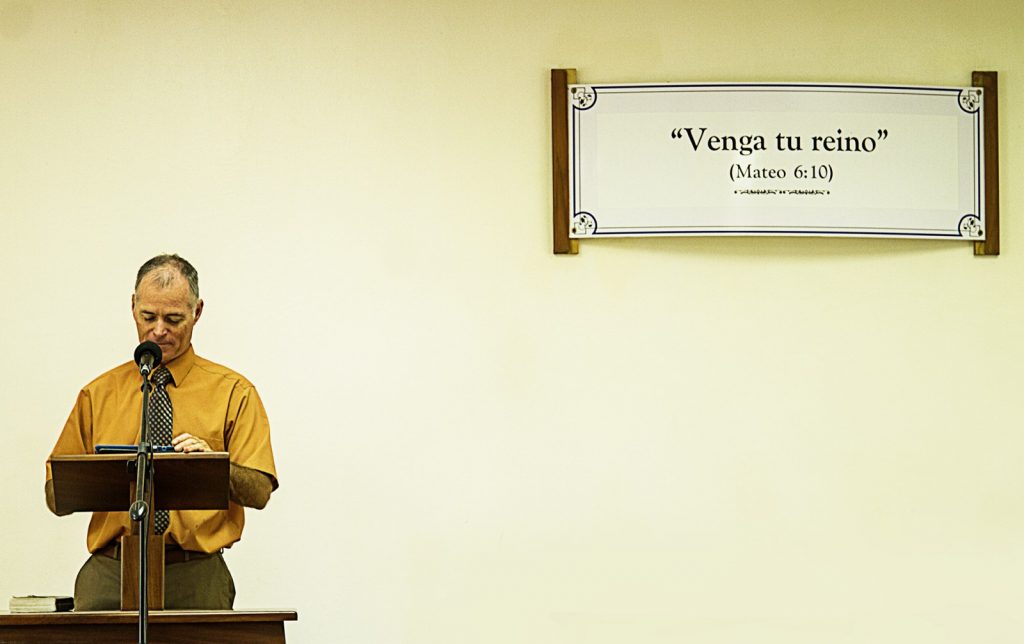 The simple design of the Kingdom Hall in Buena Vista of Samara helps members to concentrate during prayer. The walls are unadorned and a Bible message that changes each year is posted by the stage. Aaron Baldamaier reads the Bible on Sunday, December 28. 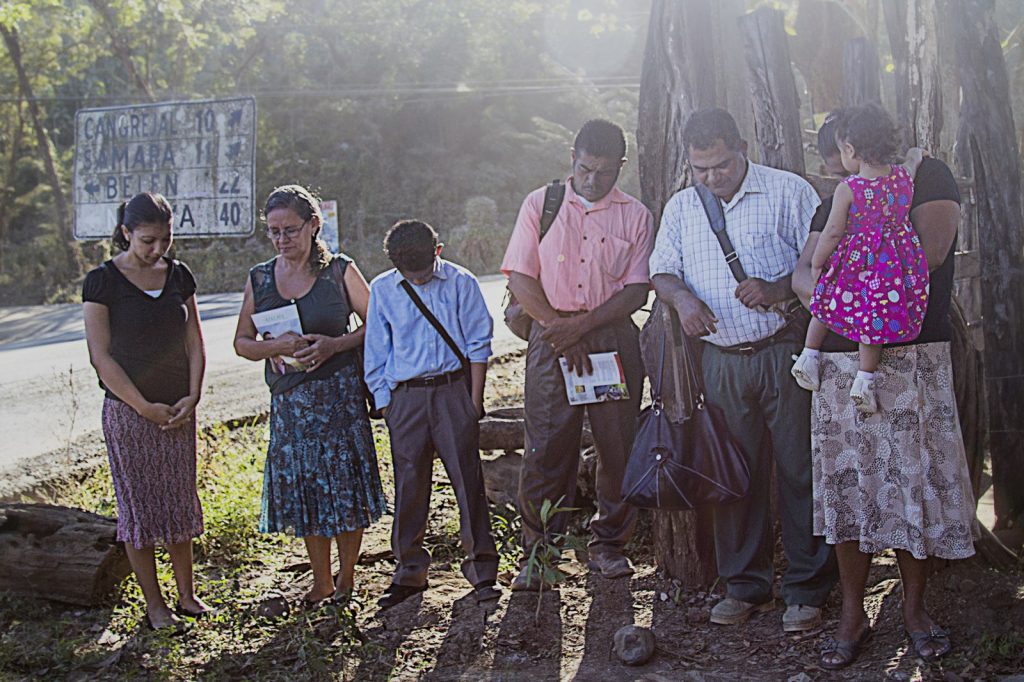 A group of Jehovah’s Witnesses pray at the intersection of Barco Quebrado before going out in the ministry at 8 a.m. on Saturday, December 27, 2014. 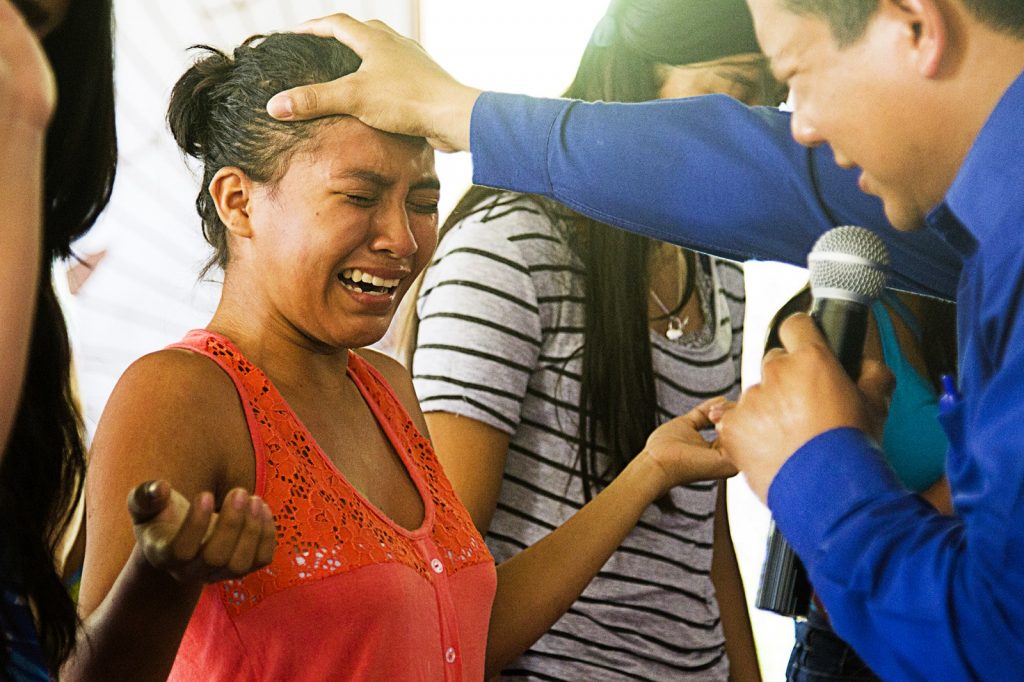 A young woman with pain deep inside cries out of repentance while Pastor Darwin Picado prays for her salvation on Sunday, December 21. 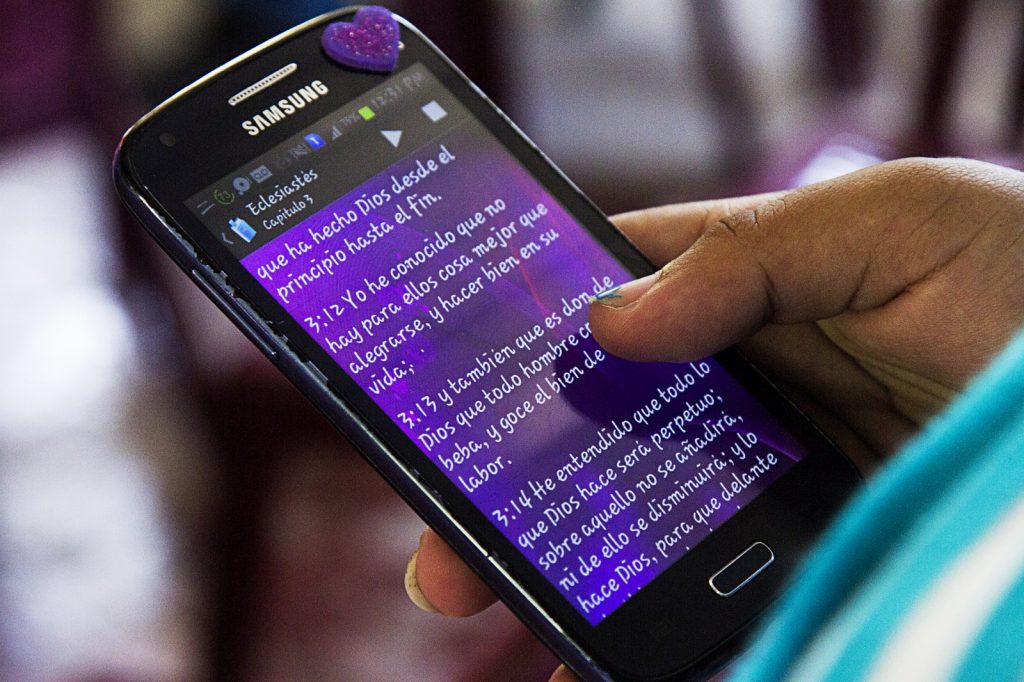 A young woman from the evangelical church in the Hollywood neighborhood of Nosara reads the Bible online from her mobile phone. 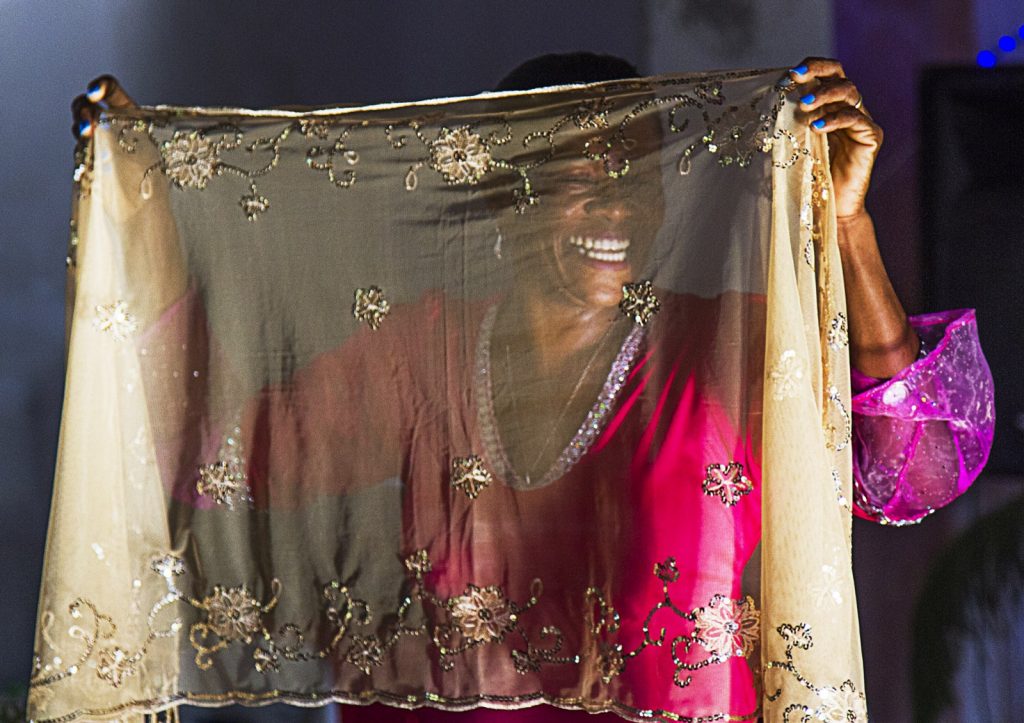 With happiness and joy, Magda Dailey performs the spiritual Davidic Dance in the Casa de Restauracion Vida de Pacto (Covenant Life House of Restoration) in the Hollywood neighborhood on Sunday, December 21, 2014. The Davidic Dance is a physical expression of praise, happiness, thanksgiving and joy toward God and comes from the name of King David.

The Promesano Indians: A resilient tradition of Guanacaste at risk

Marbella: AyA looks to buy land from a developer under investigation for irregular water administration