In Guanacaste, there was a time when the clothes worn were something more than a trend or an outfit to cover the body. They represented the social, marital, economic and religious status of those who wore them.

These days, the traditional costume is prominent in festivals and cultural activities. During the Annexation cultural week of 2015, long skirts and farmer’s hats shown off on stage demonstrated the folkloric contribution they give to the Guanacaste culture.

In this province, traditional dress is worn with pride since childhood. Smiling dancers swirl their long skirts, forming shapes at their sides. The sound of leather sandals stomping the ground pays homage to the hardworking farmer, and long hair braids dance and jump to the beat of güipipia, reminding the audience of Guanacaste in the olden days.

But according to historian Jose Maria “Milo” Junco, the outfit we see nowadays is an adaptation of the way of dressing of Guanacaste farmers, with some Central American trends.

“It is not the typical clothing of anyone. It was invented in 1940 or sometime in the 30s, when the dancer Margarita Esquivel Rohrmoser had to go to a festival in California and her seamstress, Lelia Guardia, took parts of Guanacaste clothing like pleated skirts, collared blouses and dimensions of Nicaraguan typical dress,” Junco specified.

Although the attire of this region resembles those of other provinces, there are differences within Guanacaste that characterize certain areas. 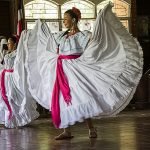 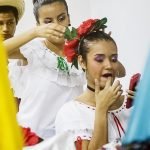 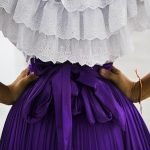 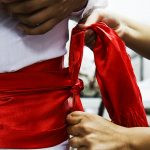 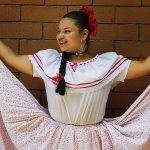 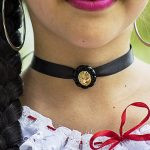 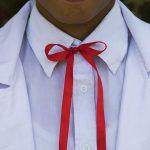 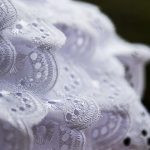 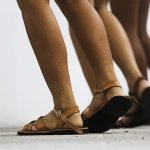 Distinguished families from Liberia dressed all in white. More elegant clothing had European influences like the wide waistband at the hip. In the 19th century, they started to use the scarf as a belt that women later used to cover their heads when they went to Mass. 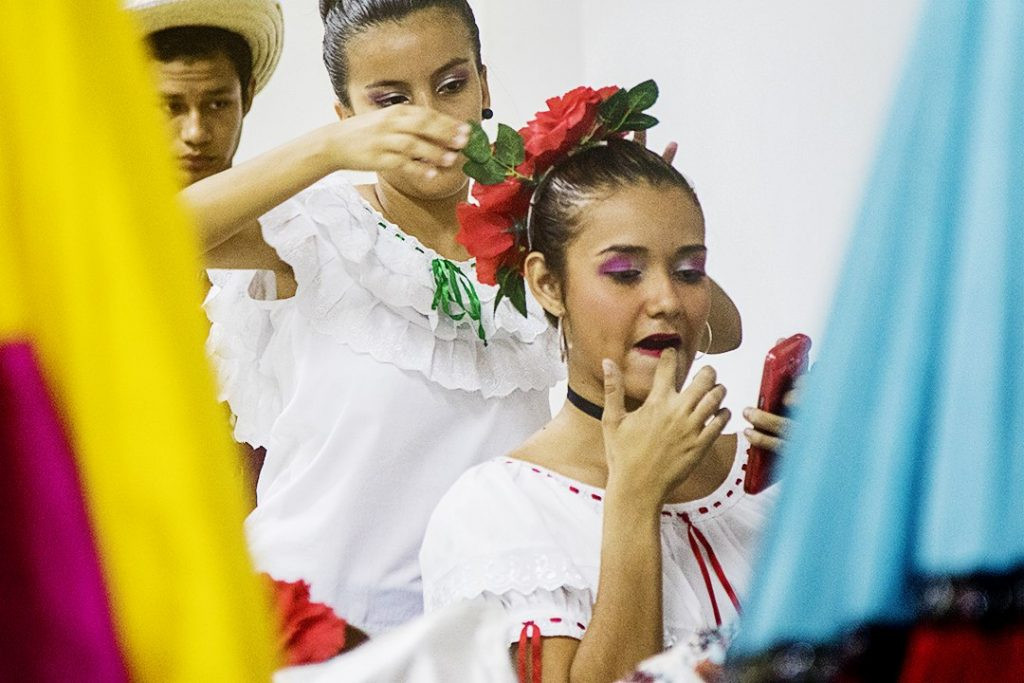 As accessories, Nicoyans of higher social statuses tended to wear tortoiseshell combs, necklaces and filigree rings brought from Mexico or Guatemala, which, over time, became part of the Costa Rican wardrobe as well. Carolina Lopez, from Nicoya High School’s folkloric dance group, retouches the last details of her makeup and hairstyle before taking the stage during Annexation week 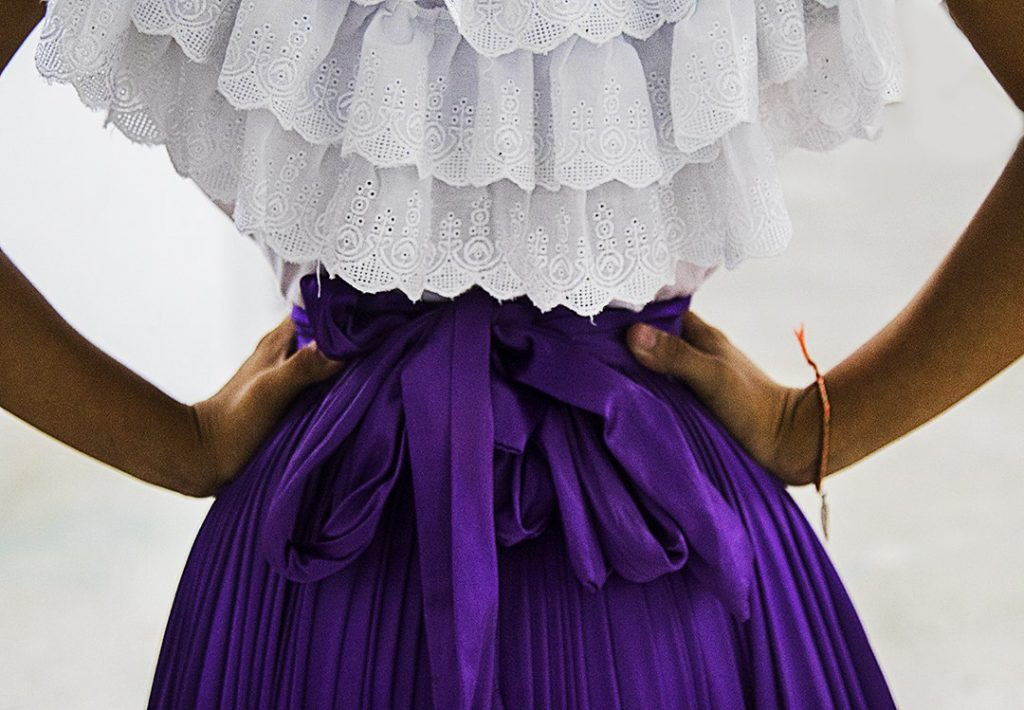 The Guanacaste woman was always very religious, so when she dressed, she was very modest and didn’t show much skin. She wore a petticoat under her skirt to give it more volume, with an embroidered border that was revealed when dancing. 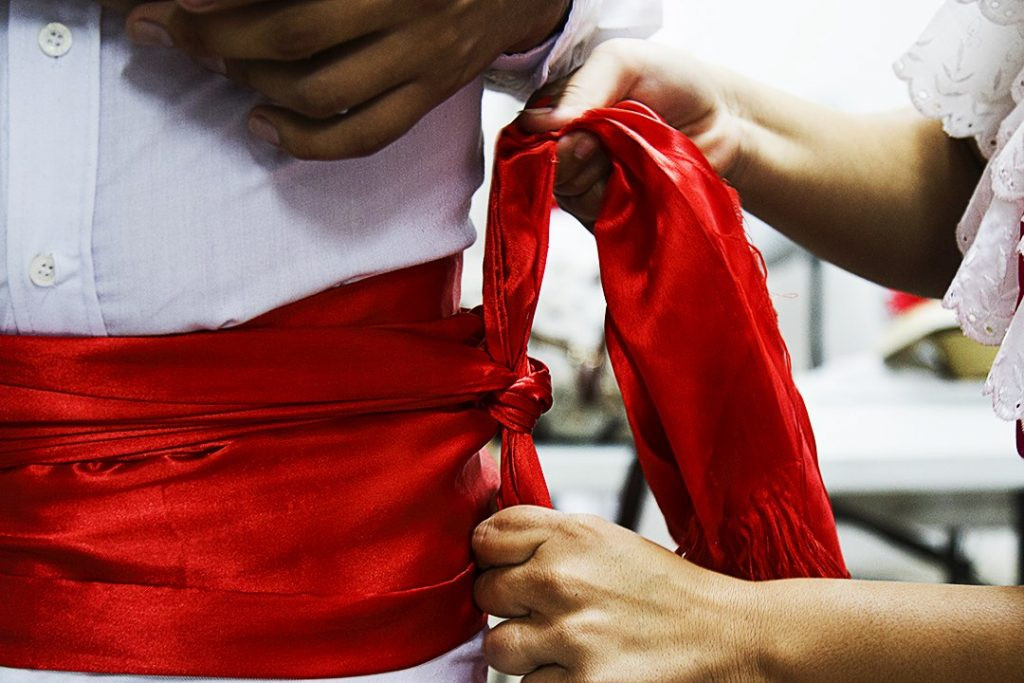 The rural man dressed in homespun cotton pants that were rolled up so they wouldn’t get dirty when running in the weeds. At the waist, he wore a thick belt for the machete and always had a handkerchief under his shirt to not dirty the collar. 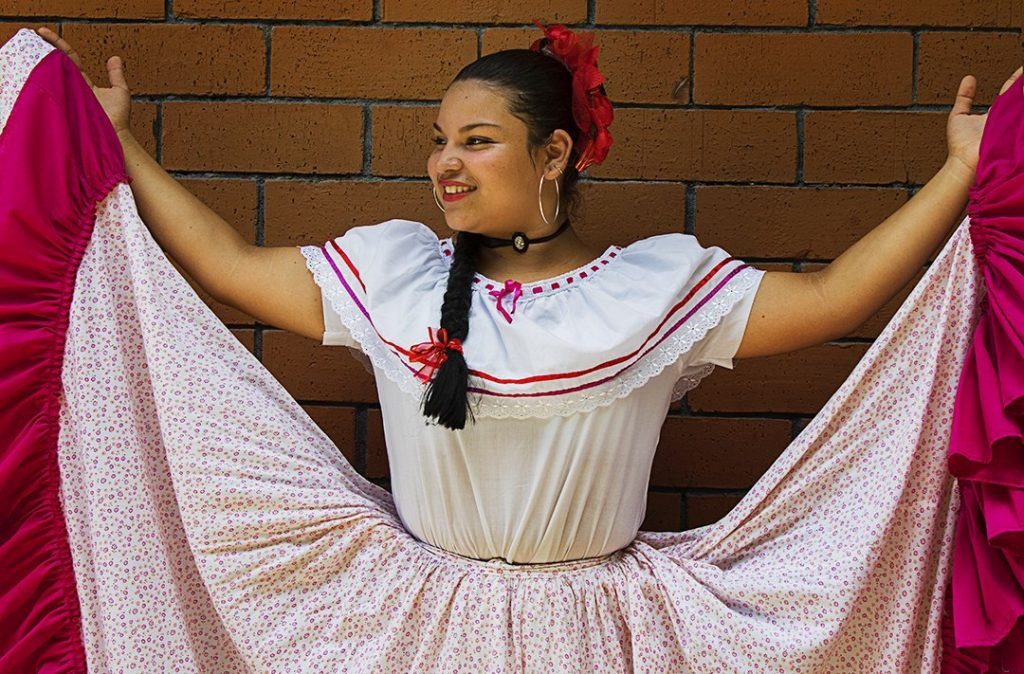 The skirt is the element in typical Costa Rican dance that draws the most attention. It has an ampleA-cut (wider at the feet) and is floor length. The skirt that was used in Guanacaste was made with light woolfabrics, printed with small flowers or little drawings. 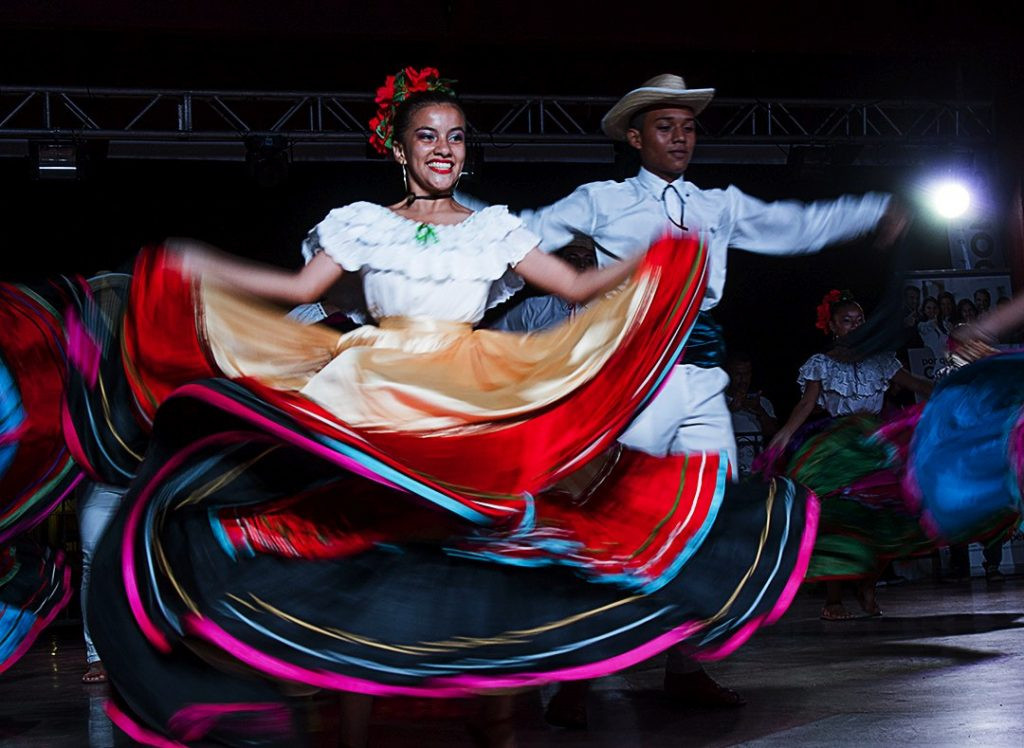 The annexation of the territory of the Party of Nicoya provided cultural wealth to the country, of which the traditional outfit is a very important part. In the middle of the last century, seamstress Lelia Guardia was inspired by the attire of the era to give life to a traditional costume, which was made known internationally and later adapted as the national costume 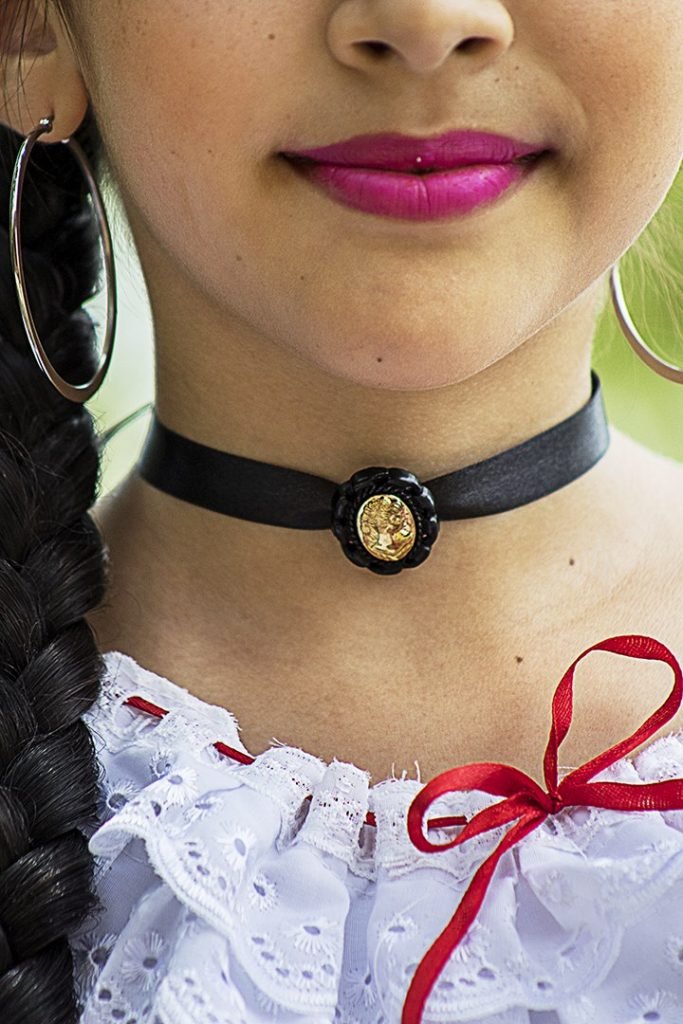 Around the neck, a velvet ribbon with a crucifix was used if the woman was married or a locket if she was single. Today most dancers use a cameo with a woman’s face on a cloth ribbon. 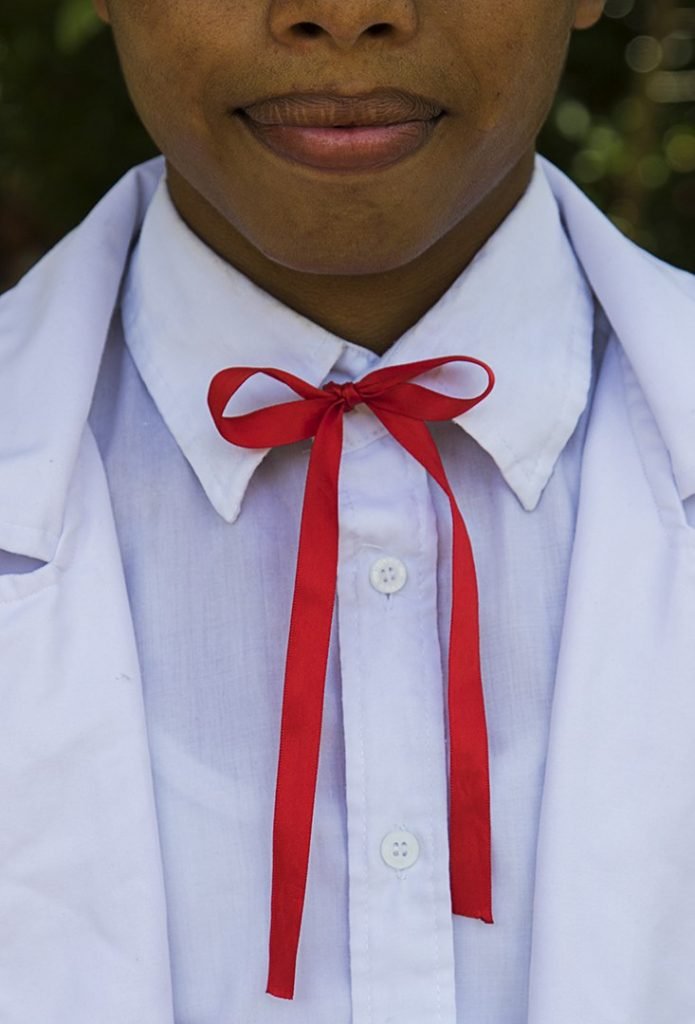 Men from Liberia wore a starched white shirt with ironed collars and no tie, with a ribbon tied under the collar. 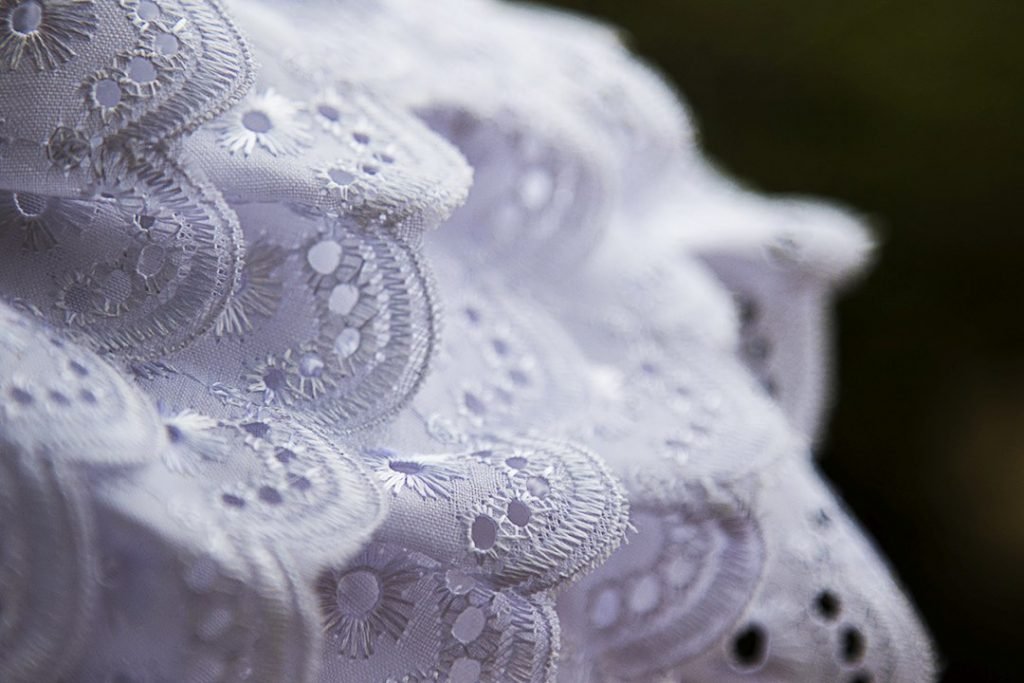 The blouse that was used by the Guanacaste woman is called a gola. The gola of Nicoya had sleeves and a smallruffle from shoulder to shoulder but it was closed in the front. The outfit that is seennowadays is an adaptation of the blouse used in Nicoya, made more low-cut and with several ruffles. 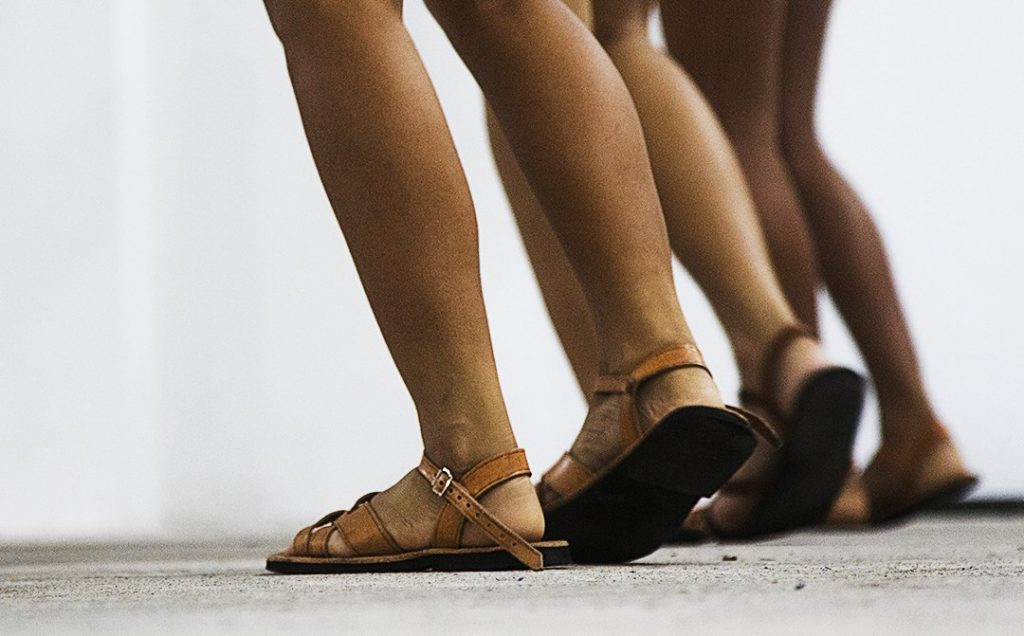 The original sabanero (man from the plains) tended to walk around barefoot or with rough leather sandals. The Nicoyan woman was one of the first to use shoes with heels. These days, most dancers use flat leather sandals.

Editorial: We Have the Tools to Fight Drought, But We Lack Vision