Waking up in bed, showering, eating breakfast, going to work, having a hot meal for dinner, going to sleep and waking up again. This is a reality that we consider normal, but if you pay attention, in the streets of cities like Nicoya, Santa Cruz or Liberia, there are other realities. There, on the sidewalks in front of churches, on park benches or in vacant lots, are the homeless.

What is daily life like for these people? Who are they? Do they have families? For several days, photojournalist Ariana Crespo interviewed and photographed five people who live on the streets of Nicoya to learn up close about how they meet their basic needs and what their stories are.

It was not easy. Some of them go weeks without bathing. Others can suddenly fly into a rage. Interviewing them is complicated and requires a lot of patience because the stories can change from one day to the next. To establish contact, Crespo gave them food and sodas although they did not always accept the food.

But we found that they aren’t completely excluded from society since they receive aid from institutions like the Oasis of Hope Church, the Salvation Army and even from people who know them.

Sleeping on park benches, sidewalks in front of business or house patios is part of the difficulties of living in the open. To get money, sometimes they look after cars, collect cans or weed gardens, although it is common to see them in certain spots waiting for the day to pass or asking for money. To bathe, they frequent water streams around downtown and wash their clothes right there.

To confirm the stories told by the people interviewed, we talked to those who help them, like the Red Cross, the Public Force and members of the Salvation Army of Nicoya. Sometimes they see cases of professionals who fall into destitution even though they have a home, family and children. They say that family conflicts, illnesses, alcoholism and drug dependence gradually take over these people, who end up wandering aimlessly through the streets of Nicoya. 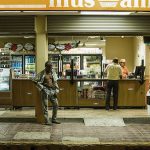 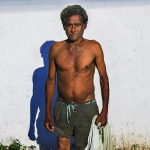 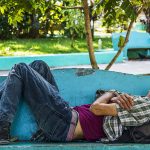 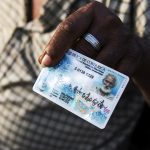 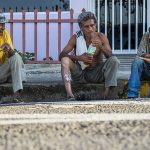 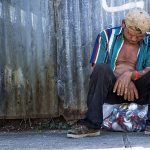 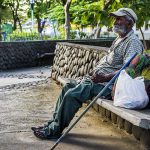 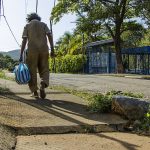 On Christmas day, after spending day and night drinking and walking around Nicoya city, "gemelo" asks for some colones before going to sleep. 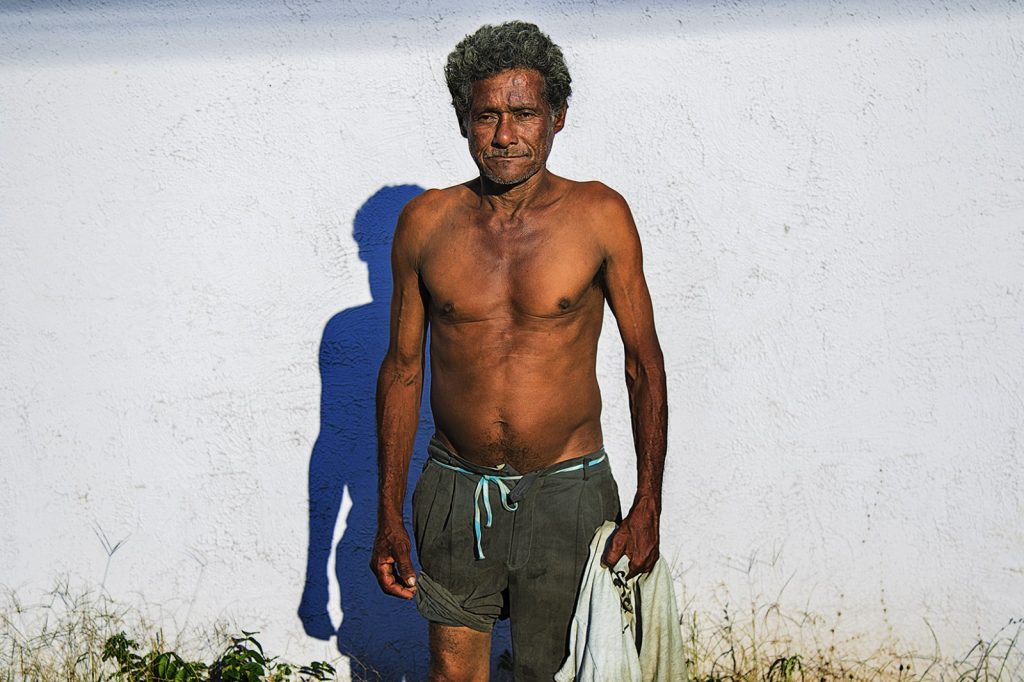 Victoriano Obando, “the twin,” is 60 and is originally from San Antonio of Nicoya. He has been an alcoholic since he was young and even though he succeeded in rejoining society, he relapsed in his 40s and has now been living on the streets for more than 20 years. 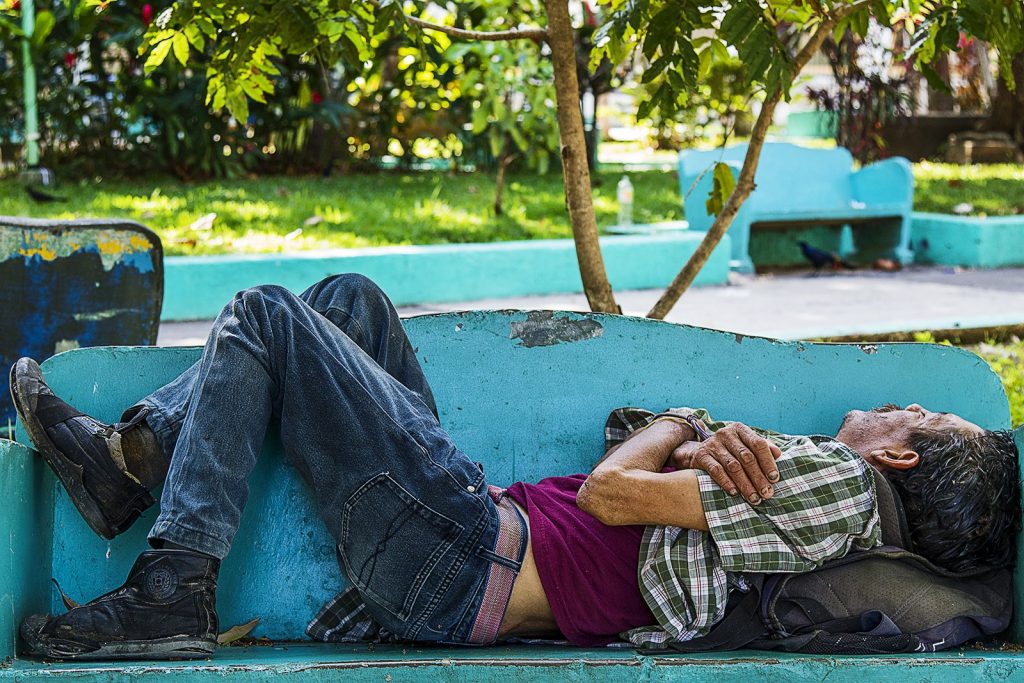 Daniel Lacayo, age 45, is an agronomist. He has family but they don’t get along. When he finished sixth grade, he was already smoking marijuana and is currently an alcoholic. When he wakes up with a drink, he wanders the streets and usually sleeps wherever he passes out. When he sleeps in Recaredo Briceño park, he uses his bag as a pillow. In it, he carries soap, detergent and some shirts. 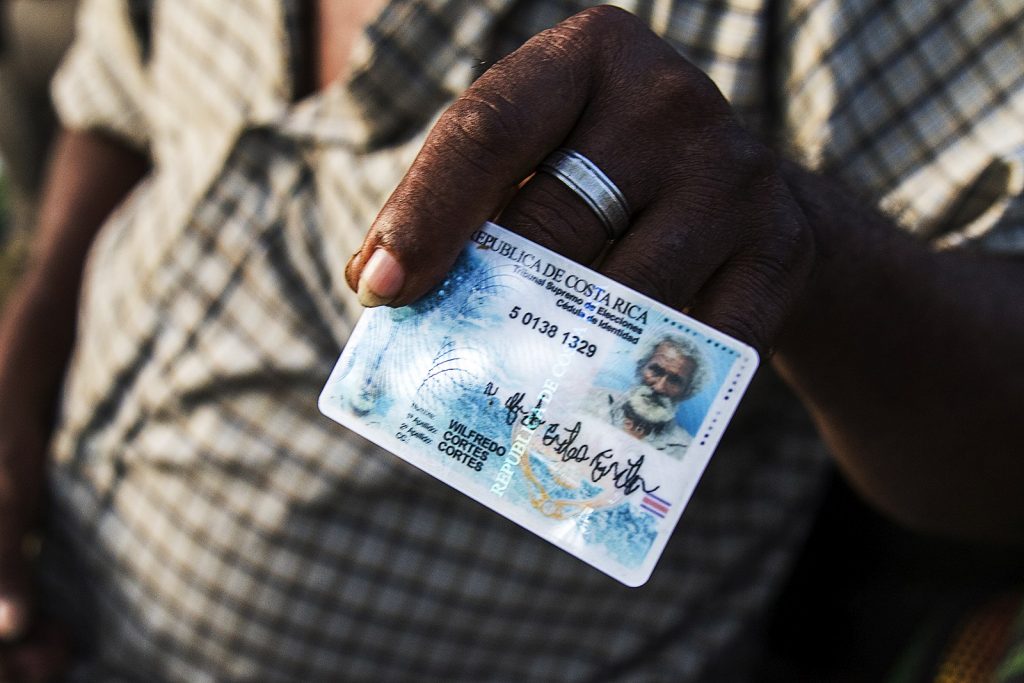 Mr. Wilfredo is known as “Moses” becuase he always walks around with a cane. He would like to get off the streets and go to a nursing home, but he says that he doesn’t have a pension or family support. An evangelical volunteer group has helped him get his ID to start the process with the nursing home and took him to the hospital to pull out two infected tooth. 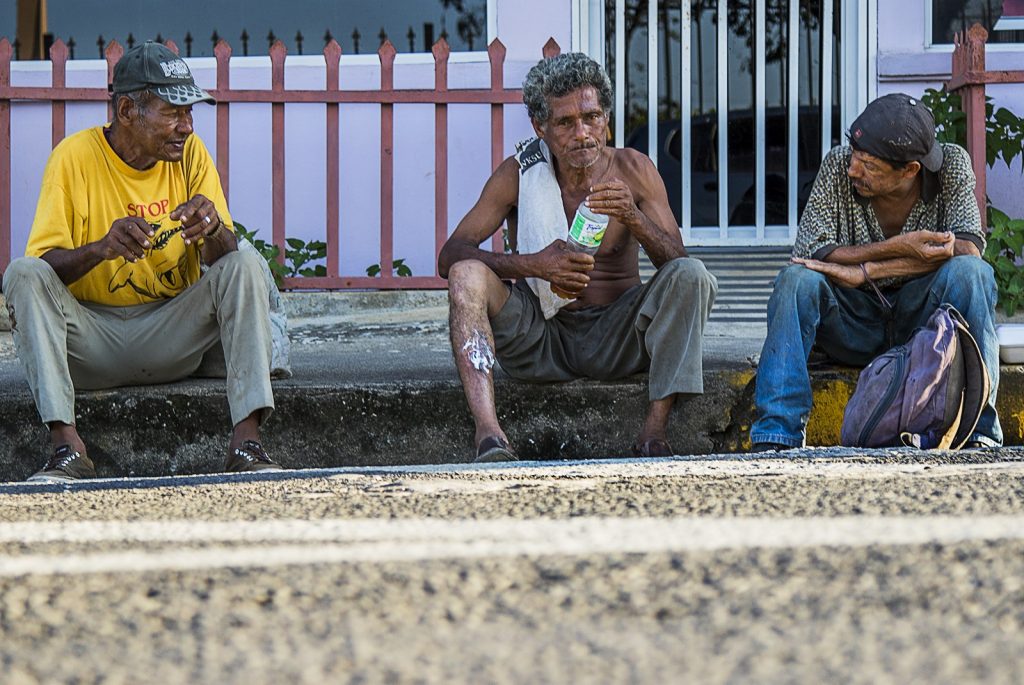 Victoriano Obando (center) and Daniel Lacayo (right) frequent a corner in front of the new Catholic Church of Nicoya. When they scrape together 500 colones (about $1), they go to the closest liquor store for a new bottle of booze. They are friends, they frequent the same spots and drink together. 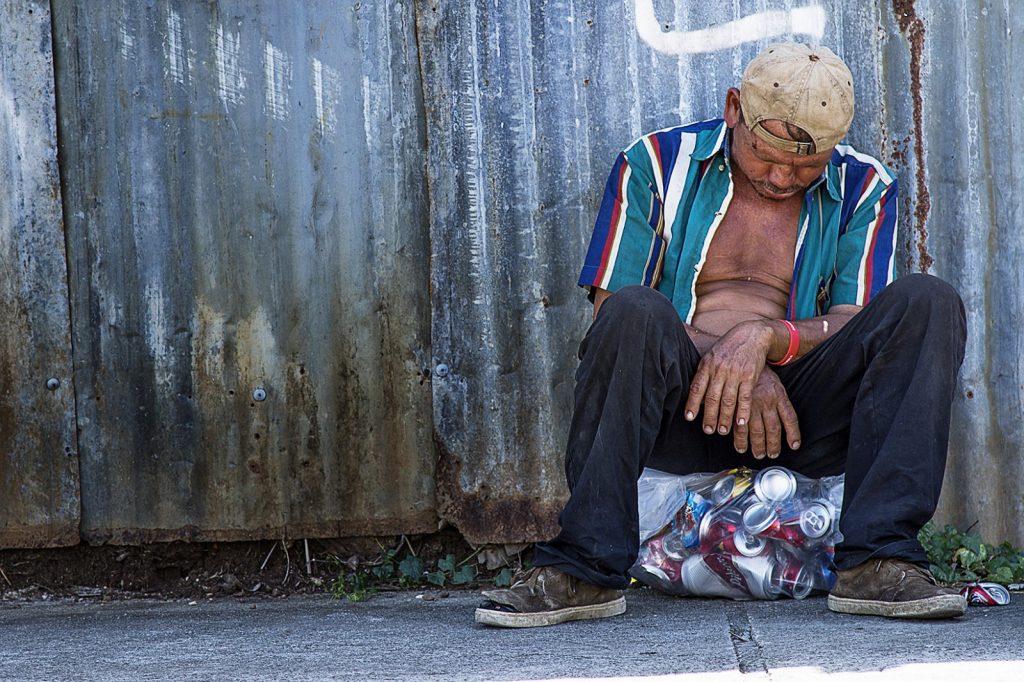 Marcos Campos is 50 years old and generally spends his days wandering around the Hotel Mundiplaza area. According to Nicoya Public Force officers, he has been living on the streets for more than three years, and although he is sometimes seen in businesses or restaurants asking for money, he isn’t much of a danger to the people of Nicoya. 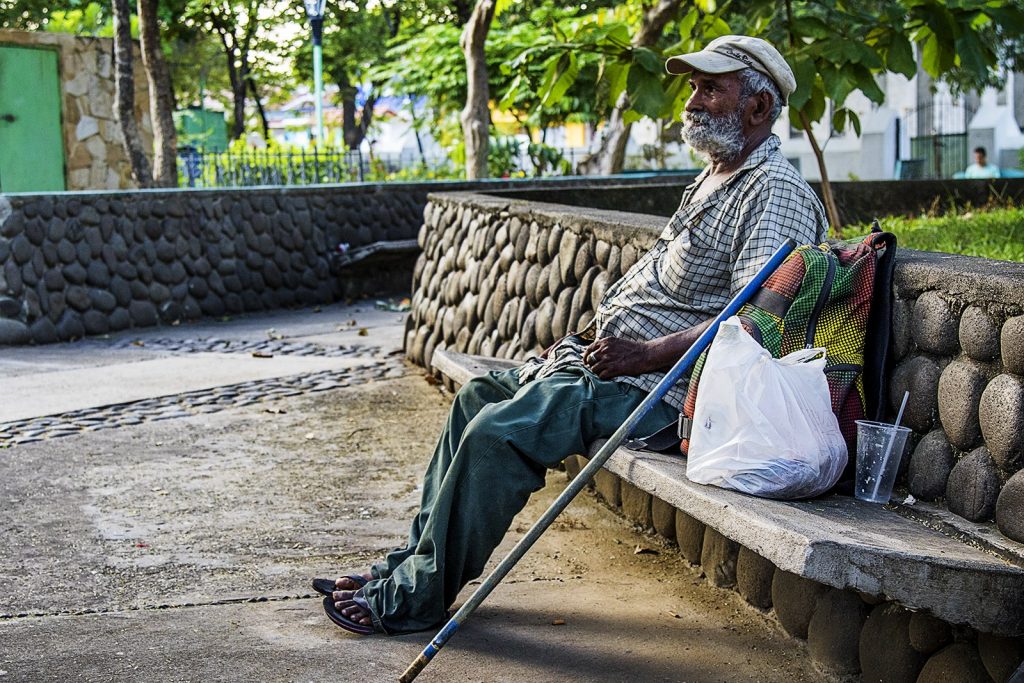 Wilfredo Cortez, age 73, doesn’t drink or use drugs. A family fight led him to life on the streets. He sleeps and lives in Recaredo Briceño park since it is hard for him to walk due to a leg injury. Despite being passive and polite, people avoid him since Cortez urinates and defecates with his clothes on, causing his odor to be very strong and flies surround him. 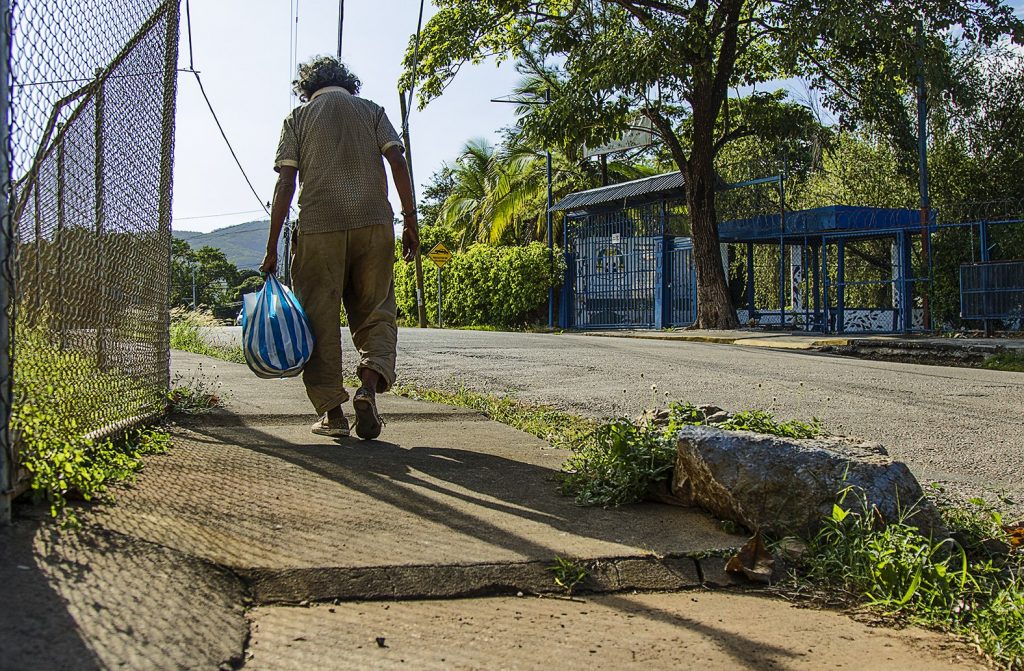 People in the El Carmen neighborhood remember that Livorio Lopez, age 88, has been homeless all his life and it seems that life on the streets has affected his sanity. These days, he has symptoms of senile dementia. However, he never fails to show up at the home of Rosa Hernandez, who lives in the El Carmen neighborhood and every day invites him to have something to drink, coffee and three meals a day.

The “Blue Zone” sells longevity without benefiting the province’s centenarians

Caliche: The singer-songwriter who started a new way of making music in Guanacaste